The past week or so has left me fluctuating between excitement and confusion with my project. I know what I want to do, I know how to do it, but I am worried it is not historical enough and while, I am super excited about the tools we are learning to use, I can’t get my mind to translate them to a final paper project.

I want to work with zip codes. In the 1960s the United States Post Office rolled out a shift in mailing from their postal zones, to zip codes. They campaign was such a revolutionary change, it even had it’s own mascot: Mr. Zip 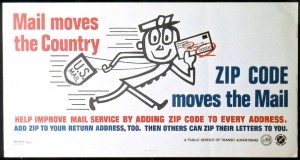 Mr. Zip encouraged people to use the new 5 digit numbers assigned to their address based on location and population. As the email and the internet have changed the way we use the USPS, zip codes have retained their importance. Divisions for zip codes do not follow only city lines, in most cases large cities have many zip codes which are used to study demographic information.  Without ruining my paper too, I’d like to share some maps  that use zip codes: 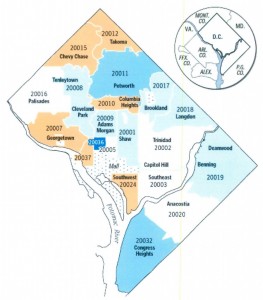 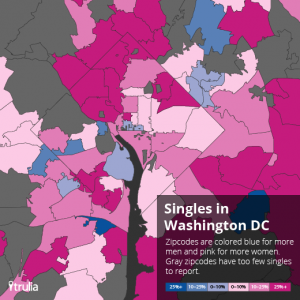 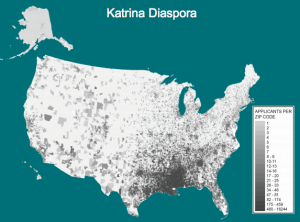 The first map shows how neighborhoods are broken down by zip code and the second shows “Singles in Washington D.C.”  The historic aspect is how zip codes came into being, but the focus of the paper would be how historians can and should use the codes in their data. The third shows where people have been displaced due to Hurricane Katrina.

I am also attaching some of the links from the last class  and some more for your mapping enjoyment: