I am going to start this post off with a disclaimer:

I have never had a visceral, emotional reaction to any painting, photograph, or sculpture. My two best friends are both artists, each holding degrees in art. They have tried to explain the complexity of so many different pieces of art work, and still the most they have ever gotten is a shoulder shrug. My inability to “get” art could by why my house is decorated with maps. They are history to me. I can see a map and discern a historical moment. I can define using logic why something is where it is in the map. It is logical. It is practical. It is functional. Art is never any of those things to me. Class last week was interesting to me because I had a hard time trying to help explain how to use a map as an argument. Going back to one of my previous posts, arguments are something I struggle with in general. The same refrain went through my head, maps make arguments, or do I make the argument based on the map.

For me it is the latter.

Let me use some examples to illustrate my point:

What caused some people to call this traffic occurrence a traffic circle while others a roundabout? I have no clue off the top of my head. I could speculate that it has something to do with regional dialects based on European influences, but I could be totally wrong. There is an argument to be made about immigration effecting regional traffic terms.

This maps is one of my favorites. Using different colors you can see who calls soda, pop vs soda vs coke.

The argument here would be the coke corporation is based in Atlanta, and commerce has effected the improper noun for cola based drinks. But what happened in St. Louis that stopped the pop spread. (Kudos St. Louis) The same goes for Milwaukee, where a water fountain is called a bubbler but soda maintains its moniker. Again there is an outside factor creating the differences, but what is it? St. Louis was a historical French area, while Milwaukee is heavily German. Any guesses I make would be speculative, but there is a research topic and an argument hidden in these maps.

Let me move a way from regional dialects for a second, this article from The Atlantic shows different factors effecting urban growth, high value properties and building types. By looking a the layout of these cities we can begin to see patterns, as historians we should strive to find out what effected the development of the patterns.

Lastly if ever there were a map that could be used to start an argument it is this map: 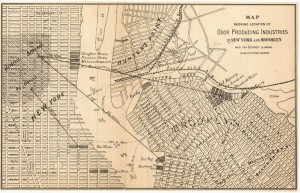 Thanks again to The Atlantic for providing me with an article entitled This 19th Century ‘Stench Map’ Shows How Smells Reshaped New York City. The title should be enough of an explanation on what the map argues. In a nutshell- people moved away from the stink.

For most of the maps it is a visual difference that shapes the argument. That is why I needed to start this post off with the disclaimer of my inability to “get” art. I may not be able to look at a painting and feel the emotion of the painter, but I can look at the visuals provided by a map, find the logistical differences and start to disseminate an argument. While I may not know what the argument is at first, I can start to question and research which hopefully leads to a solid argument at the end of the project.

Soda vs. Pop vs. Coke

Oh and for Kim a gratuitous picture of the pug! 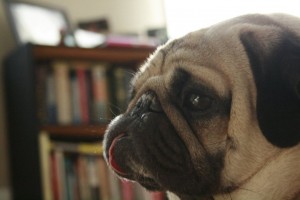