If it was not obvious, I was terrified of this project, but it came out ok.  I decided on a kids treasure map. I figured if I am going to have to do this I should have some fun with it.  Using the grid method I think I got a pretty close facsimile to the original. I was a little bummed that I couldn’t use Ortelius to create the mountains and water effects in my map, but it turns out Illustrator has a similar function of “spraying symbols.” Since there were no mountains, I wound up going with large rocks.

The biggest issue for me was scaling. The trees are not to scale in my computerized version, and I couldn’t draw trees to scale.  Like I said, it came out ok. The Louvre won’t be calling anytime soon.  I think I could have added more graphics and detail but again, I am having issues with scaling down. I just don’t have the artist eye to scale down and then place things in the right places. I may revisit this and add the key and the actual trail later, but for right not this was what I could do with my anxiety building. Now that it is done, I realize I had more fun then I thought I would. 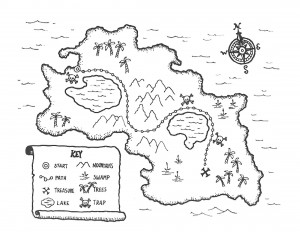 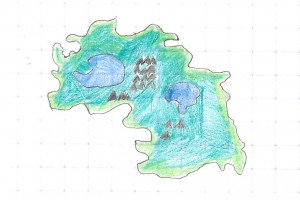 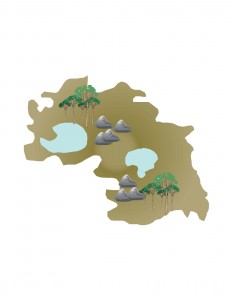 The readings for the week were great! In case you couldn’t tell by my previous posts, maps of places that are imagined are my favorite. The idea that things can be mapped based on narrative, like in the case of Middle Earth over the US and Europe based on someone taking the time to find these places is fascinating to me.  There is passion and devotion in a project like that.

Speaking of passions, I realized I had been letting my passion dictate the project and it was becoming too unwieldy. I decided to switch from Roadside Attractions to the history of the Zip Code system. The numbers of the 5 digit code are linked to regions in the area, and at times the post office has struggled to keep up with population growth. I would compare the old regional code system with the zip codes introduced in the 60s, and how many zip codes are in an area of high density.

After seeing a few other maps, I decided to take a little spare time and play around with my map more, this is the end result. 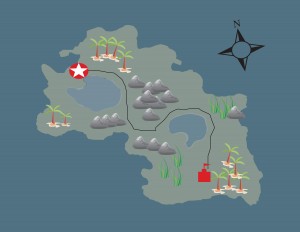 It looks like a cartoon if you ask me.

4 thoughts on “Art and Math are not my strong points”